“Taking collective action to tackle air pollution every day can make a massive difference, as shown at the London Marathon 2018.

“With traffic free streets pollution levels dropped by 89%. Imagine if more people left the car at home every day. We would suffer far fewer health problems from air pollution.

“Let’s take action together on Clean Air Day, 21 June, to make a real difference to the air we breathe.”

Pollution monitoring of nitrogen dioxides was undertaken at a monitoring site in the City of London that is on the Marathon route. Analysis of the King’s College pollution data on the day of the London Marathon compared to the previous three Sundays in April 2018 found a significant drop in pollution levels across all pollutants.

Air pollution causes heart disease and worsens asthma in adults and children. It is damaging the health of all of us, but particularly young children and those with heart and lung problems. King’s College London estimates that up to 9,500 early deaths occur in London each year as a result of air pollution.

Research has shown that there are still significant gaps in public understanding of air pollution and we urgently need to impress upon people the need for them to get involved and how they can make a difference.

2018’s Clean Air Day on 21 June will create a groundswell of action bringing thousands of people together to make UK cities cleaner, healthier and greener. It will provide guidance on the actions people can take today to reduce the air pollution they create and advice on what they can do to protect themselves and their families in the future.

Clean Air Day 2018 calls on Londoners to leave their cars at home on 21 June, following pollution-busting data from London Marathon

Sunday 22 April, London shut its roads to vehicles, and opened them to the London Marathon runners, providing the perfect opportunity to test the impact that this would have on London’s high levels of air pollution. With exactly two months to go to the UK’s annual Clean Air Day, organisers Global Action Plan analysed King’s College London pollution monitoring data, and discovered that there was a massive 89% drop in harmful NOx emissions compared to the average Sunday in April. 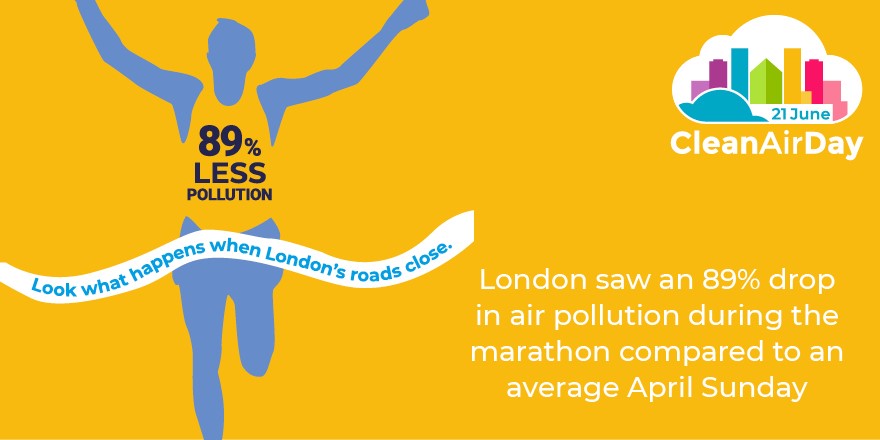